Sour Cream is a dairy product obtained by fermenting regular cream with beneficial lactic acid bacteria. Traditionally, sour cream was made by letting cream that was skimmed off the top of milk ferment at room temperature — the bacteria that naturally developed during fermentation thickened the cream and made it more acidic, which was a natural way of preserving the cream.

Cultured Sour Cream is a similar product to the traditional sour cream. It is made by inoculating the cream with lactic acid which produces a thick, viscous, slightly tart sour cream.

Our Sour Cream starter makes genuine luscious and thick Sour Cream of exceptional quality with a traditional rich flavor and a fresh mild taste with just a slight tartness. 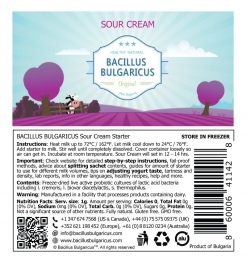 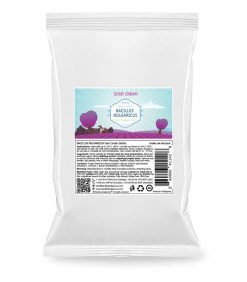 Our Sour Cream has a lusciously thick consistency and a fresh mild taste with just the right amount of tartness.

The starter makes genuine luscious and thick Sour Cream of exceptional quality with an unforgettable rich flavor, consistency, taste and aroma.
You can use raw or pasteurized regular cream, double cream, half-and-half, or a mixture of cream and milk. The higher the fat of your original cream, the thicker and more delicious your sour cream will become.
Simply select a pack size and enjoy some great Sour Cream!
Select Pack Size

You can adjust the thickness and the flavor of your sour cream by controlling the time of incubation, making it anywhere from creamy liquid to thick and smooth yogurt-like consistency, and from mild and sweet to nicely tart and even sour flavor. See below for instructions on how to do this.

This is a heirloom Sour Cream starter with live active bacteria – you can reuse sour cream from your previous batch to culture your new batch, for as long as you wish.

Sour Cream is a mesophilic product, which means you can culture it at room temperature.

All you need is a pack of our starter and cream.

Our Sour Cream starter works with any type of dairy cream — raw or pasteurized regular cream, double cream, half-and-half, or a mixture of cream and milk.

You can also use non-dairy milk, however when using vegan milks you might need to add a thickener as those won’t thicken on their own.

The higher the fat of your original cream, the thicker and more delicious your sour cream will become. When using a higher fat content cream, you can use our Sour Cream starter to make cultured crème fraîche, whipped cream, and more.

Making Sour Cream comes down to bring your cream to room temperature (around 76°F / 24°C), adding the starter, stirring well until it dissolves and then incubating it at room temperature until it sets, for about 12–14 hours. As simple as that!

However, here are some more detailed instructions as well as some tips on tweaking the consistency and the taste of your sour cream.

There are two ways to make Sour Cream – the traditional mesophilic way and a faster, fail proof way, which I personally recommend as it yields results faster. The two methods are explained below.

Use this method if you prefer to make your Sour Cream the traditional way, manually or with the help of a yogurt-making machine.

Do not forget to save a cup of the ready-made sour cream to use for making your next batch! Keep that in the fridge and make sure you use it to make your new yogurt within 3-4 days to ensure all bacteria is viable and in great condition.

This method relies on keeping the cream warm during incubation, which speeds up the process by making the culturing environment more beneficial to the development and procreation of the lactic acid bacteria.

Tips on Adjusting the Taste and Consistency of Sour Cream

You can easily adjust the thickness and the flavor of your sour cream to your liking by controlling the method and time of incubation.

To make sour cream with mild and sweet taste use the traditional mesophilic method. Simply bring your cream to 76°F / 24°C, add the starter, stir well until it dissolves and incubate at room temperature until it sets, for about 12–14 hours.

To make tart sour cream use the failproof heating method. First heat up the cream to just over 113°F / 45°C, then cool it down to 76°F / 24°C, add the starter, stir well until it dissolves and incubate at room temperature until it sets, and then for an additional 12–24 hours. The longer Sour Cream sits at room temperature, the tarter it will get.

For creamy more liquid sour cream, use the traditional mesophilic method to make the sour cream and stop it at the desired liquid consistency. Simply move it to the fridge when it is as liquid/thick as you’d like it. Then consume it fairly quickly because it will continue to gradually thicken in the fridge.

For super thick sour cream, incubate the sour cream until it fully sets (regardless of the incubation method) for about 12–14 hours, then move it to the fridge and leave it there for at least 2 days. Sour cream will continue to gradually thicken in the fridge.

The Process in Pictures 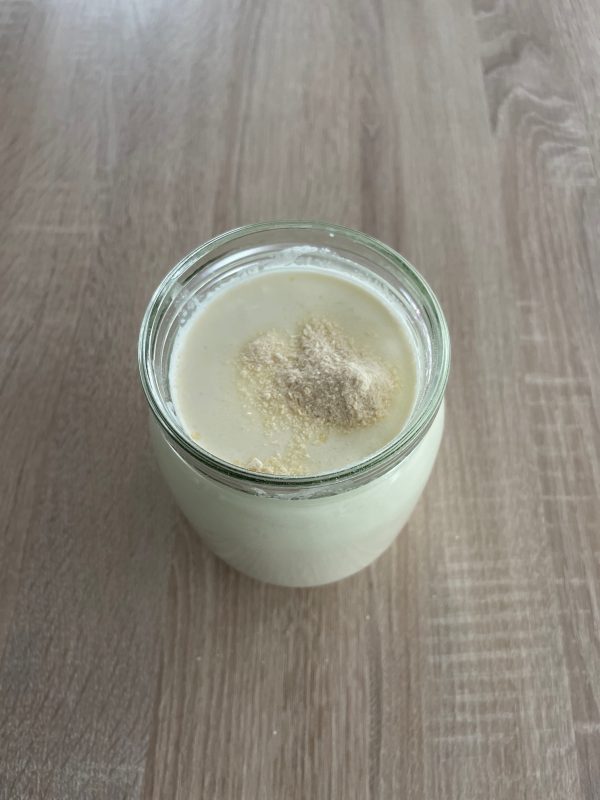 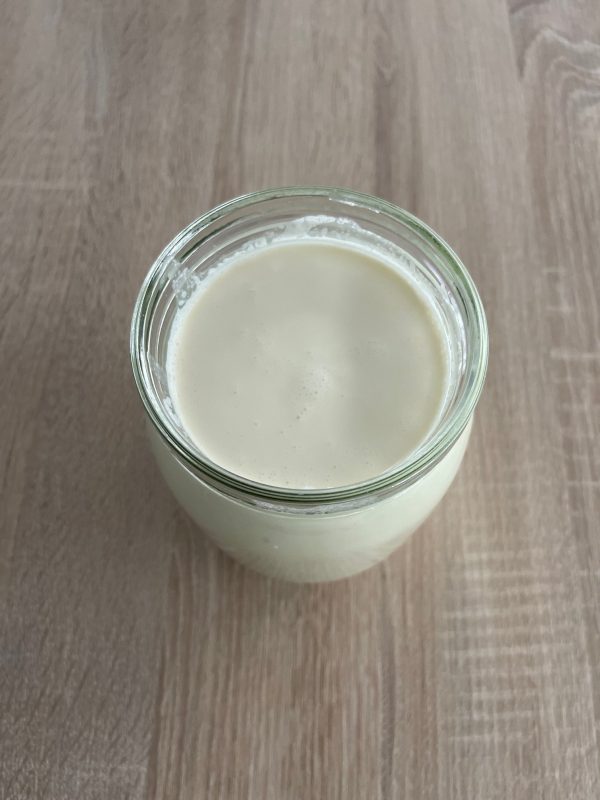 Stir in the starter well until it dissolves. 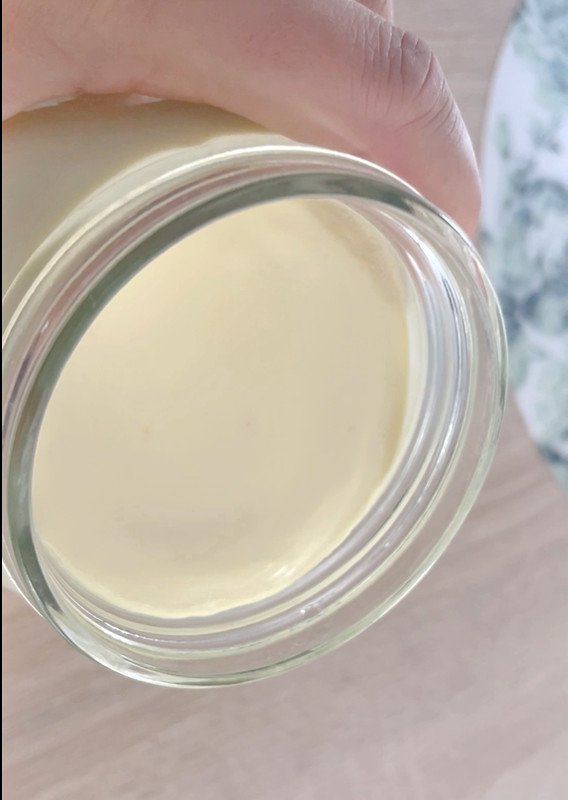 Enjoy!
Note: I like my sour cream very thick but if you like yours runnier, just take a look at the notes above.

Our Sour Cream has a lusciously thick consistency and a fresh mild taste with just the right amount of tartness.

The starter makes genuine luscious and thick Sour Cream of exceptional quality with an unforgettable rich flavor, consistency, taste and aroma.
You can use raw or pasteurized regular cream, double cream, half-and-half, or a mixture of cream and milk. The higher the fat of your original cream, the thicker and more delicious your sour cream will become.
Simply select a pack size and enjoy some great Sour Cream!
Select Pack Size
Get News and Deals

Add your email address to Ivo’s Insiders List and learn about promotions and deals before everyone else.

Our starters contain freeze-dried live active bacteria cultures, featuring the world-famous Lactobacillus Bulgaricus strain. All our starters are fully natural with no additives, preservatives, artificial colors or flavors. They contain no GMO ingredients and are gluten free.

Epilepsy Safe Mode
Dampens color and removes blinks
This mode enables people with epilepsy to use the website safely by eliminating the risk of seizures that result from flashing or blinking animations and risky color combinations.
Visually Impaired Mode
Improves website's visuals
This mode adjusts the website for the convenience of users with visual impairments such as Degrading Eyesight, Tunnel Vision, Cataract, Glaucoma, and others.
Cognitive Disability Mode
Helps to focus on specific content
This mode provides different assistive options to help users with cognitive impairments such as Dyslexia, Autism, CVA, and others, to focus on the essential elements of the website more easily.
ADHD Friendly Mode
Reduces distractions and improve focus
This mode helps users with ADHD and Neurodevelopmental disorders to read, browse, and focus on the main website elements more easily while significantly reducing distractions.
Blindness Mode
Allows using the site with your screen-reader
This mode configures the website to be compatible with screen-readers such as JAWS, NVDA, VoiceOver, and TalkBack. A screen-reader is software for blind users that is installed on a computer and smartphone, and websites must be compatible with it.

We firmly believe that the internet should be available and accessible to anyone, and are committed to providing a website that is accessible to the widest possible audience, regardless of circumstance and ability. To fulfill this, we aim to adhere as strictly as possible to the World Wide Web Consortium’s (W3C) Web Content Accessibility Guidelines 2.1 (WCAG 2.1) at the AA level. These guidelines explain how to make web content accessible to people with a wide array of disabilities. Complying with those guidelines helps us ensure that the website is accessible to all people: blind people, people with motor impairments, visual impairment, cognitive disabilities, and more. This website utilizes various technologies that are meant to make it as accessible as possible at all times. We utilize an accessibility interface that allows persons with specific disabilities to adjust the website’s UI (user interface) and design it to their personal needs. Additionally, the website utilizes an AI-based application that runs in the background and optimizes its accessibility level constantly. This application remediates the website’s HTML, adapts Its functionality and behavior for screen-readers used by the blind users, and for keyboard functions used by individuals with motor impairments. If you’ve found a malfunction or have ideas for improvement, we’ll be happy to hear from you. You can reach out to the website’s operators by using the following email

Our website implements the ARIA attributes (Accessible Rich Internet Applications) technique, alongside various different behavioral changes, to ensure blind users visiting with screen-readers are able to read, comprehend, and enjoy the website’s functions. As soon as a user with a screen-reader enters your site, they immediately receive a prompt to enter the Screen-Reader Profile so they can browse and operate your site effectively. Here’s how our website covers some of the most important screen-reader requirements, alongside console screenshots of code examples:

We aim to support the widest array of browsers and assistive technologies as possible, so our users can choose the best fitting tools for them, with as few limitations as possible. Therefore, we have worked very hard to be able to support all major systems that comprise over 95% of the user market share including Google Chrome, Mozilla Firefox, Apple Safari, Opera and Microsoft Edge, JAWS and NVDA (screen readers), both for Windows and for MAC users.

Despite our very best efforts to allow anybody to adjust the website to their needs, there may still be pages or sections that are not fully accessible, are in the process of becoming accessible, or are lacking an adequate technological solution to make them accessible. Still, we are continually improving our accessibility, adding, updating and improving its options and features, and developing and adopting new technologies. All this is meant to reach the optimal level of accessibility, following technological advancements. For any assistance, please reach out to